A few photos from the set of Ant-Man (2015), a welcome shrinking-down of the rapidly expanding Marvel Cinematic Universe in terms of scale, stakes and bombast.

The film was shot mainly with Arri Alexa XT digital cameras and Panavision Primo V prime lenses, though its intricate effects work required Oscar-winning cinematographer Russell Carpenter (Titanic, True Lies) to employ everything from the high-speed Phantom Flex to the Canon 5D Mark III DSLR. You can read about the film’s production in the August issue of American Cinematographer Magazine and in the next issue of the quarterly effects bible Cinefex.

For more Marvel behind the scenes pics, check out our spreads featuring set photos from Guardians of the Galaxy and The Avengers. 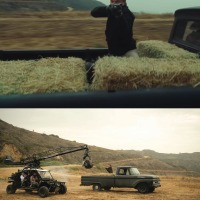