“You’re kind of questioning, ‘Does this look too much like a shitty old ’90s music video?’ – Cinematographer Caleb Heymann on leaning into a retro horror vibe for the A […]

“You’re kind of questioning, ‘Does this look too much like a shitty old ’90s music video?’ – Cinematographer Caleb Heymann on leaning into a retro horror vibe for the A Nightmare on Elm Street/Hellraiser influenced fourth season of Netflix’s Stranger Things.

Check out my full interview with Heymann over at Filmmaker Magazine.

Here’s a few snippets, starting with Heymann discussing the show’s move away from Leica glass after three seasons. The new batch of episodes also eschewed the show’s history of Red cameras in favor of the Alexa LF.

In years past it has always been a Leica show. This time, we ended up going with some vintage rehoused lenses, primarily Canon but a mixed set of vintage lenses from the ’60s. There were twelve primes in total that gave us a lot of choices for the wide to middle range of focal lengths. Our camera house was Keslow Camera in Atlanta, but we also got to work with Camtec, another great rental house based out of L.A. They gave us some rehoused Falcons, these customized lenses only available through them that were originally developed for Bradford Young for Solo. They’re great because they’re lightweight, small and they’ve got great close focus. Some are very unique—the 45mm is a favorite lens of mine. It’s super fast and has a very dreamy look when you shoot it wide open. So, you’re able to either shoot everything at around 2.8 and get a pretty consistent look across the set, or go a little bit more open with certain focal lengths and get something a little bit more abstract. We also used Lensbabies for some of the hallucinatory moments with Eleven in the missile silo and in the Hawkins lab.

And here’s Heymann on lighting the show’s alternative dimension, the Upside Down.

Filmmaker: Episode seven begins with an extended sequence in the Upside Down, this sort of mirror dimension intertwined with Hawkins. How do you create the Upside Down look, with its blue ambiance?

Heymann: That features, basically, a five-minute long walk and talk. The Duffer brothers really wanted to be able to shoot it uninterrupted, so we had to light up enough forest so they wouldn’t have to cut. We walked out [the route] with the script and figured out about how much forest we were talking about. Interestingly, that was the first thing we shot from Block 4 [of episodes seven, eight and nine]. Because of the curveball of COVID production, we weren’t able to shoot any of the big crowd scenes early on. So, we actually did that opening of episode seven in the Upside Down when we were shooting the Block 1 episodes, just so we would have something to shoot without crowds. So, that got pulled up and shot completely out of sequence, which is a little scary because you lock yourself into some things continuity-wise and it was the biggest stretch of Upside Down lighting that had ever happened on the show.

It was quite a task to light about six hundred feet of Upside Down forest for the actors to walk knowing we’d be looking in all directions. There were at least six Condors lighting the background and about 12 helium balloons. The Upside Down, from a lighting standpoint, is kind of this liminal space between a normal moonlit night and a bit more of a twilight look, where you do have a certain amount of rich blue light coming from the sky. The sky is dark, but it’s still luminescent. So, it does require a lot of balloons to create that look. You have to figure out where you are going to hide all these helium balloons and which trees to tie them down to. We also need to account for the red lightning flashes in those scenes. It ended up being quite a rig.

Filmmaker: What were the units?

Heymann: We used SkyPanel 360s with a Vulture a moving head that allows [the unit] to pan and tilt remotely. In Atlanta, the weather can change so quickly and you don’t want to have to send up people to man these Condors unless you absolutely have to. Fortunately, we’re in an era now where we could have the 360s remotely pan and tilt, then we would have a couple of these SolaFrame 3000s with moving heads. That allows you to do everything from the ground: pan and tilt, flood and spot, throw in gobos. That could all be controlled by the board operator without having to physically go set something up. We could hit somebody with a backlight or throw a highlight into a background, all at the touch of a button. There was also a unit called the Chrome-Q Color Force  that was pretty useful when we needed red lighting to carry longer distances. 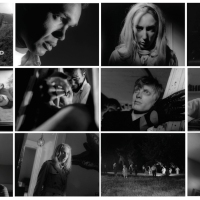